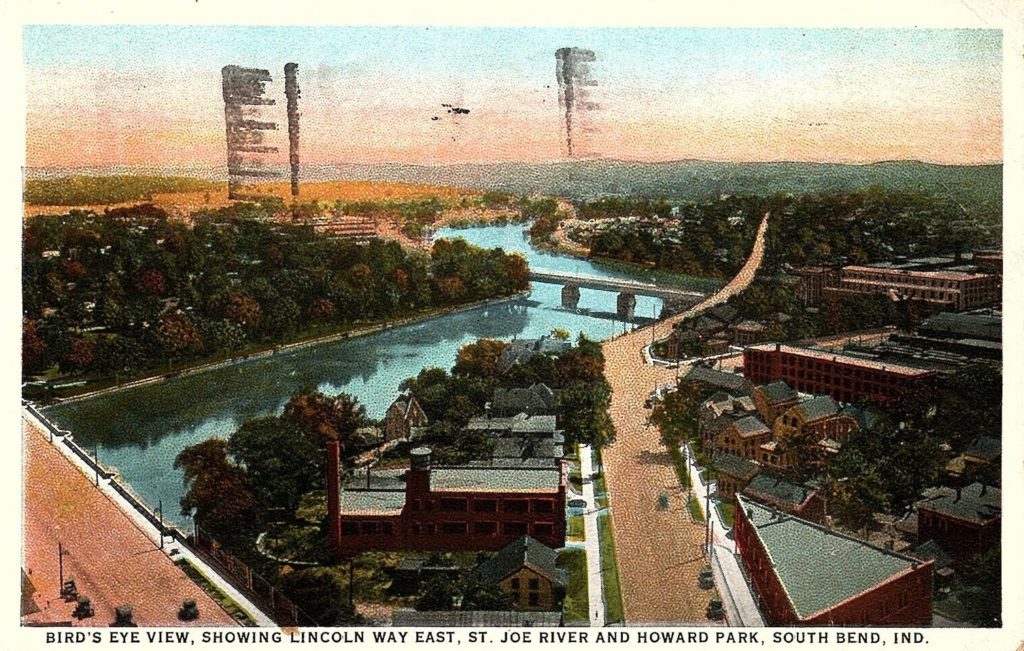 The Lincolnway East Historic District was designated by ordinance in 1984. It is the only local historic district in the city that has been certified as eligible to be listed in the National Register of Historic Places. One other local district, Chapin Park, has already been listed on the National Register in 1982. The land was originally owned by Christian Holler, a pioneer of German Township who purchased it in 1829 from the U.S. Land Office in Fort Wayne. He sold it in 1835 to fellow pioneers, Samuel and Mary Leer, who incorporated it into their homestead; their hewn-log cabin remained here until as late as 1907.

After the Leers’ deaths the land was divided among their heirs with some complications and contention. In 1870, the land was partitioned by action of the Circuit Court; eventually most came into the hands of their son, Jacob Leer. Jacob subdivided a small portion of this land abutting the old Vistula Road in 1886 and a larger portion in 1888, leaving the land south of the railroad tracks clear for agriculture.

Jacob’s son, Delmar, also became involved in real estate to assist his father in the promotion of his subdivision; he platted a portion of the land here after Jacob’s death in 1893 when the property was divided between Delmar and his sister, Kittie May. The area was further subdivided in 1907 and in 1923.

The first house built here was likely that of Catherine C. Wenger, the widow of Martin Wenger; both were pioneers who homesteaded directly to the west of the Leer property. Mrs. Wenger had a frame Queen Anne structure built in 1890 (1164 Lincoln Way).

This area developed rapidly after 1895, probably due to its favorable location away from the dirt and noise of the growing city and its ready access to the South Bend & Mishawaka streetcar line located on Vistula Avenue. This streetcar company began in 1882; by 1890 the route was heavily traveled. In 1915 Vistula became part of the Lincoln Highway, one of the nation’s first coast-to-coast highway systems. As a result, Vistula Avenue was changed to Lincolnway East.

In the early years the neighborhood became home primarily to middle-class families. The 1910 Federal Census listed eighteen residences. Three were rented – to a florist, a painter-decorator and a time keeper (only heads of households were listed). The remainder of the homes were lived in by owners. Among these were a cigarmaker, traveling salesman, lawyer, coal dealer, two carpenters and a cabinet maker. Delmar Leer also had a house built on what had been his grandparent’s land.

Other notable owners in 1900 were William Hoke, secretary-treasurer of the Hoke Manufacturing Company, makers of agricultural equipment and Albert M. Harris, founder of South Bend Spark Arrestor Co. The parents of Thaddeus M. Talcott, Jr. lived here for a number of years around the turn of the century. Talcott was a lawyer who was elected to the Indiana House of Representatives in 1902, who served one term as a State Senator in 1904.

The majority of the residences in the district were built between 1890 and 1925 and consist of a mix of vernacular structures – American Foursquares and Gabled Ells – and “styled” structures – Queen Annes and Bungalows. Most were built on Vistula facing the river. Although the area has always been primarily residential, two commercial structures were also erected here: a frame store building (c.1905), the Post Grocery Company, at 1416 Leer and a greenhouse, the Riverside Floral Company, at 1324 Lincoln Way (demolished in 1991).